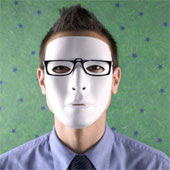 Over the years I have received plenty of anonymous letters from people who wanted to criticize me or something in the church they disliked. These letters usually contain petty complaints about such things as musical style, worship style, dress codes, why I should get a haircut, and whether or not I believe in a pre-tribulation rapture. This goes with the job of being a pastor. Most of these letters are comical.

However, in the last six months I have received more of these kinds of letters than usual. They are different - not childish, but evil. Most recently someone has even set up a fictitious e-mail account enabling the originator to send secret letters to me without being discovered.

The content of these letters has crossed a certain line - they are savage and contain an obvious intent to harm. Never have I seen this degree of malice coming from professed followers of Christ – and from people I know - but who do not attend PCC.

Anonymous letters reveal how weak such a person really is and makes them very, very small. It also demonstrates why such a person could never be a serious candidate for church leadership, or if in a position of leadership, should be disqualified and removed. If this is how they handle their problems, they are unfit to manage God’s house. Period. If they will do this to me, they would do it to you; not sparing the flock of God.

Would you want to attend church with those kinds of people? Would you want people like that influencing you and your family? Not me. If that is the caliber of person you are getting your spiritual cues from, you are dumb.

Of course, I can never prevent someone from sending anonymous and cowardly letters to me. But I can prevent them from ever reaching me; which is what I do. They are all intercepted (by trusted people) and simply thrown out. My e-mails are moderated, deleted, or end up in my spam folder.

At any rate, I saw this quote from Charles Spurgeon, and thought he said it much better than I ever could:

“Never write what you dare not sign. An anonymous letter-writer is a sort of assassin, who wears a mask, and stabs in the dark. Such a man is a fiend with a pen. If discovered, the wretch will be steeped in the blackest infamy.”

I wish I had said that.