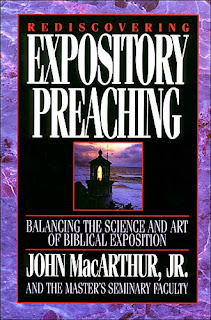 Have you ever heard the term expository preaching? Basically it means teaching verse-by-verse through a large block of scripture (such as a chapter or book of the Bible). This is a very good and effective method of preaching and teaching. I happen to enjoy using this method myself, and do so about three or four times each year. Some examples of when I have used the expository method:

However, some people believe that the expository method is the ONLY form that should ever be used, and they will take you to the mat over this issue. Churches have been split over this very matter. Some will even go as far as calling other forms of preaching as being shallow, man-centered, carnal, for babes, or buffet preaching. The problem with that line of thinking is…..

First of all, there is no single DEFINITION of what "expository" really means. The truth is different preachers have their own definition of expository preaching. I am aware of at least THIRTY DIFFERENT DEFINITIONS of expository preaching; and many of these definitions even CONTRADICT THE OTHERS. So who is right? Which one is the correct definition? You see, it becomes meaningless to use these labels. The phrase is overused and ambiguous.

Two, there are OTHER METHODS of preaching/teaching God’s Word that are JUST AS EFFECTIVE (such as topical and textual). Some people hold to the opinion that the ONLY TRUE BIBLICAL METHOD of preaching is the expository style. This approach to preaching has wrongly been canonized by some as the only acceptable way of preaching.

Consider this - NO ONE IN THE NEW TESTAMENT EVER USED THIS STYLE! Not Paul. Not Peter. Not even Jesus! In fact, Jesus was a topical teacher. The Sermon on the Mount is a perfect example (Matthew 5, 6, 7).

Recently I read this quote written by a proponent of the Expository ONLY style of preaching:

“Any kind of preaching other than verse-by-verse exposition is an aberration from the apostolic norm.”

Oh really? The only problem with that position is that NOT ONE of the New Testament apostles ever used that style! Not one!

Three, there is NO SACRED METHOD of preaching style. All methodologies are man-made, and anytime you take a man-made method and make it sacred IT BECOMES IDOLATRY. There is no sacred method. It cannot be proven by the scripture that there is any one sacred method of preaching. In fact, there are a lot of different preaching styles found in the scripture that you may not eve like! But they are there nonetheless.

Four, IF NOT DONE WELL expository preaching is absolutely BORING and BREEDS DEATH rather than life. The Bible says the “power of life and death are in the tongue,” so each time a preacher teaches God’s Word, it either brings people closer to life or closer to death. Just take look closer at the teachers making the claim for expository “only” preaching and you will notice that many of them have a tendency towards over-intellectualizing the scripture and communicate their lofty presuppositions accordingly. They are a “cut above the pew level” so to speak – and most folk simply cannot understand this pontification. I understand the need for Biblical literacy, but keep in mind that being a student of the Word involves more than listening to an EXTENDED COMMENTARY of a pastor from the pulpit. This style of preaching often comes across as sounding more like a LECTURE IN GRADUATE SCHOOL rather than a life-giving message of hope for the average believer. One word - BORING! Too many word studies and historical analysis not only puts people to sleep, it leads to less time for talking about applying the word to everyday life.

This is how a boring expository preacher crafts his sermons….

Start with an exegesis, the grammatical-historical method of getting the data out of the Bible. Then build Biblical Theology on top of that, learning the Biblical themes. But the acme, the highest point, is Systematic Theology by putting it all together. The sermon manuscript consists of “points” that are somehow related to the text.

Rather than walking through the text, line by line and making relevant applications as you go, the boring expositor makes it academic – complete with alliteration. Anything less would not be “sermonic” enough. Ugh.

The black robe is the robe of the scholar. The heart of the meeting is the extremely long lecture-sermon. The darkest part of the room is the center where the dark wooden table and the massive wooden pulpit and the black-robed preacher are. It’s a picture of the dark ages itself.

on April 29, 2009
Email ThisBlogThis!Share to TwitterShare to FacebookShare to Pinterest
Labels: Pastors, Preaching