Why I Beleive in Church Growth (Part 3) 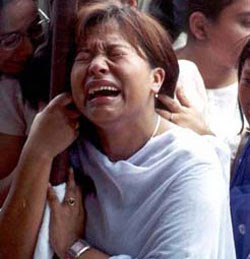 I believe in church growth because GOD’S WORD COMMANDS IT.

God’s Word commands all churches and all believers to be involved in the task of reaching the lost and making disciples – all of which contribute to growing churches and kingdom advancement. This means God wants us to be active in sharing our testimony with lost people, witnessing to them, inviting them to church, and other similar efforts.

19Go ye therefore, and teach all nations, baptizing them in the name of the Father, and of the Son, and of the Holy Ghost: 20Teaching them to observe all things whatsoever I have commanded you: and, lo, I am with you always, even unto the end of the world. Amen. (Matthew 28:19-20).

This means that God wants us to do three things: Go fish for men… Baptize them… and Disciple them. People are suffering, hurting, & lost.... and God has put us here to do something about it!

The above verse is called the Great Commission and is the God-given mandate to the church. Yet in many churches it has become the Great OMISSION – they do everything EXCEPT fish for men. As a New Testament church, we are direct descendants of the first church. As such we have inherited all of its graces, its power, and its privileges. But we have also inherited its RESPONSIBILITIES and its MANDATE.

Some church leaders like to complain about other churches that ARE growing as being shallow, man-centered, and guilty of dumbing down the gospel. Blah, blah, blah! While there may be churches that are guilty of doing this, in reality it is not that common. In fact, most churches that are growing do so because they are OBEDIENT TO the GREAT COMMISSION and have FOUND A WAY to EXECUTE.

While these complainers wax eloquent, they DO NOTHING about the Great Commission themselves. They have 10,000 people within walking distance of their own churches, most of whom who are not attending anywhere, and they do nothing to reach out to them. There are single mothers, the terminally ill, the divorced, fragmenting families, poor people, and the spiritually empty living within ear shot of their churches – and what do they do? – they teach yet another Bible lesson to the frozen chosen and lock these undesirables out of the church so they can keep their church pure. It must make God grieve. They should probably get off their “field of dreams” mentality – i.e., "build it and they will come" – and get down to business. Contrary to their opinion, growing churches have figured out how to reach these kinds of people.

At PCC we believe our church should grow larger and smaller at the same time – larger in the weekend services and smaller through small groups.

on April 23, 2009
Email ThisBlogThis!Share to TwitterShare to FacebookShare to Pinterest
Labels: Church Growth