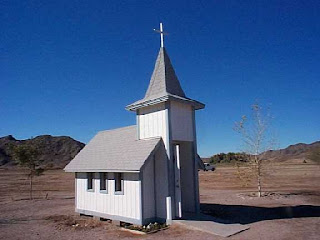 There is a lot of criticism in Christian circles today about the pitfalls of larger churches (usually defined as 1000 in attendance or more). While all churches of all sizes have their fair share of problems, the criticism leveled against larger churches are usually very one-sided with obvious bias.

What follows is a balanced response….

The critics of larger churches usually state the following:

1. Large churches capitulate to culture
2. They water down the gospel
3. They are too user friendly
4. The are light on ministry and theology
5. They revolve around a strong pastoral personality
6. They entertain

There are many things to criticize about larger churches, but in the list above, EVERY SINGLE ONE OF THESE elements can be FOUND in smaller churches! In fact, many times they are even MORE PROMINENT in smaller churches.... (though not in every small church… to be fair).

It seems to me that the driving force behind criticisms of large churches is the simple fact they are large. I mean churches are being condemned by the watchdogs out there on SIZE ALONE.

CAPITULATE TO CULTURE? What’s the difference if a larger church uses lights, a band, and video screens in their morning services… while a smaller church has an Easter cantata, a singing Christmas Tree, a kids musical, or a Southern Gospel concert with a toe-tapping quartet? It boils down to a matter of PREFERENCE. Smaller churches like four hundred year old hymns and southern gospel, while larger churches prefer Hillsongs or Passion. Please don’t tell me that larger churches are the only kind of church that ‘caters’ to the preference of people in the congregation or plans its corporate worship experiences based on a common denominator of shared musical style. Paa….lease! (eye roll).

USER FRIENDLY? The smaller church is just as user friendly as larger churches. They cater to the expectations of the core group and the prominent families in the church. Church leaders (in small churches) feel the pressure to win the approval of the fat-cats with the money, and rely upon the tried-and-true traditions of the past for user-friendliness… just as much as a larger church does when they conduct a sermon series on “Five Ways to Improve Your Marriage.” Usher friendly? Give me a break!

LIGHT ON MINISTRY & THEOLOGY? Not true. Large churches often get that way because of a strong emphasis on Biblical teaching rooted in theology. Additionally, they are usually more effective in every facet of ministry than their smaller counterparts. It’s also interesting to note that many of these critics like to boast about their belief in the Bible as being perfect and infallible - (yes, the rest of us believe the same way) - yet many of these people attend churches that have a form of church government that is NOT EVEN BIBLICAL! (i.e, congregational, episcopal, presbytery, or lay-elders). I mean, if you are going to claim the infallibility of God’s Word, then structure your own church accordingly!

STRONG PASTORAL PERSONALITY? Then there is the criticism that larger churches revolve around a strong pastoral figure. Really? I would suggest that this is more prominent in SMALL CHURCHES than large churches. Consider all the responsibilities of the small-church pastor – he alone visits the sick… makes hospital rounds… conducts all funerals…. weddings… baby dedications…. orders the Sunday School curriculum… officiates at the deacons meetings.. chairs the finance committee… runs the church business meeting… etc. You get the idea. In truth, there is nothing wrong with a strong pastoral personality in leading a church – whether that church is large or small. Healthy churches, more often than not, have a strong personality as its central leader.

These critics have strong opinions about larger churches, but very few of them ever point out the GOOD being done by these churches; such as their ability to mobilize large numbers of people for the work of the ministry, their ability to influence a city, and utilizing massive resources (both human & financial) to change their community. These facts are IGNORED in the studies, articles, and blogs that celebrate the good of small churches while condemning large churches. For instance, I know a church that gave over 500 pairs of shoes (last Christmas) to the kids at an elementary school in their community – and many of these kids live in deep poverty. I know another church that GIVES AWAY A HOUSE (yes, a real house) for free every Mothers Day to a single mother who lives below the poverty line. Do these acts ever get the headlines? Not often.

GETTING LOST IN THE CROWD? Critics say that it is impossible to experience meaningful fellowship and community in a large church, because you ‘get lost in the crowd.’ This simply is not true. There is no correlation between the size of a church and the warmth of a church. Large churches can be warm or impersonal, and small churches can be the same way. It has everything to do with the friendliness of its people – not its size. In fact, small churches might be more guilty of unfriendliness than larger churches. Many people who leave small churches cite the reasons for their departure as being because of family traditions, politics, and social networks already in place for decades that effectively marginalized them in the church family.

While some of the criticisms of big churches are accurate, some of it is also rooted in jealousy, envy, ignorance, and personal preference. Many of these same people who condemn large churches haven’t baptized anyone in the last 20 years, seen a single convert in more than a decade, or reached out to their community – the poor & minorities – for a half century. That is more common in the small church (and more grievous a failure) than their complaints of larger churches, who they accuse of ‘catering to culture.’ A hard look in the mirror for self-evaluation is in order here.

In the end, each church must be BOUND by BIBLICAL TRUTH and DEVELOP its OWN STYLE of personality and identity in its community. Whether that church is in Kenya, Africa, and uses goat-skin drums in worship, or is the underground church in China that uses rice instead of unleavened bread for communion, each church is given liberty by the Word of God for LOCAL EXPRESSION in their culture and mission field.

If a church is preaching doctrinal error, heresy, or ‘another gospel,’ then it should be pointed out for all to see. Such churches and its teachers would be ‘enemies of the cross’ and ‘wolves in sheep’s clothing’ and must be exposed. On the other hand, it is simply mean and un-Christ like to criticize another church because they observe certain practices that are outside of your personal preferences – and then attempt to use the Bible to validate your position.

When such people get to heaven, they will be very surprised to see other people there who GOT there through the very churches they spent their time on earth criticizing.