Christians Shouldn't Judge is a MYTH 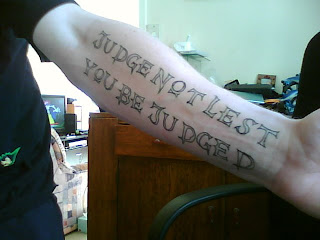 If you would ever like to see people get up in arms, simply call something sin and begin speaking out about behaviors or lifestyles that God forbids.

It won’t be long before somebody (who otherwise doesn’t have much use for the Bible) begins to pipe up and suddenly quote Matthew 7:1…. “Judge not that ye be not judged” and wax eloquent about the virtues of tolerance.

The idea that Jesus (or the Bible) forbids us to judge is a myth. It is another silly idea that cannot stand up to the actual words of the Scriptures. Refusing to make judgment calls, or call sin for what it is, is NOT what Jesus commands. The text in Matthew 7:1 (which is so often misquoted and misapplied) is simply telling us not to judge improperly.

Today, tolerance is the catch-word for every bizarre belief, every behavior, and every standard of morality. We have been conditioned by society, and the misapplication of Scriptures, to tolerate anything and everything. As a result, in most circles, disagreeing with someone else’s beliefs, morals, or lifestyle is considered to be a major social faux pas, and a sure sign of being an arrogant bigot. And when someone glibly quotes Matthew 7:1, they are (presumably) taking the moral high road of tolerance and sanctimony, while you are  the judgmental one.

There’s only one problem with that view: That’s not what Jesus actually said, and it is certainly not what He meant. He not only told His followers TO judge, but gave them instructions on HOW TO judge PROPERLY. And for the record, Jesus did quite a bit of judging Himself!

Why We Need to Judge
If we are not allowed to make moral and spiritual judgments, then we have no objective way to distinguish between truth & error, or morality & immorality. But Jesus, and the NT, tells us precisely how to judge because some belief systems are simply wrong and some lifestyles are flat out sinful. Judgments should be made through a scriptural filter in order to distinguish between light and darkness. After all, Jesus said you will know a tree by its fruit.

If we refuse to label certain behaviors that Jesus called sin, choosing cultural tolerance instead, then we are disagreeing with Jesus, and not following His Word.

The truth is Christians SHOULD judge and they should also NOT judge – both are true. We are not permitted to condemn, criticize, or pass ecclesiastical judgments upon people. Neither are we allowed to be a fault finder, for that too is sin. But we are permitted to judge false doctrines, the worthiness of potential elders, leaders, politicians, lifestyles, and a variety of other behaviors so as to discern between good & evil. What makes judging right or wrong is the spirit, motive, or attitude in which the judging is being done.

But he that is spiritual judgeth all things…… ( I Corinthians 2:15a)

on July 08, 2009
Email ThisBlogThis!Share to TwitterShare to FacebookShare to Pinterest
Labels: Devotional