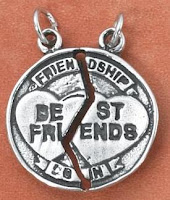 It’s painful to lose a friend. But getting a friend back can be more painful. That's why most broken friendships are never "truly" reconciled; it's easier to hug the pain.
The only way to truly reconcile a broken friendship is to to it the Bible way. That means having the “difficult talk” about what caused the strain in the first place. If offenses were committed they must be talked about and if sin was committed it must be pointed out. There is no way around that.

For instance. Some good-hearted (and maybe naïve) Christians happen to believe if they ignore an offense committed against them and pretend it did not happen, that they are extending grace and forgiveness to the offender…. and that we should do this even if the offender is unrepentant or shows no remorse! “Let’s just pretend it didn’t happen and move on.”

Is that what God expects? Is that really the best response? No. Here's why. It completely ignores the Biblical process for reconciliation. The Bible demands that we deal with offenses by face-to-face meetings to discuss the issue. It is also a misapplication of grace. Spreading a thin glaze of Christian grace on top of raw emotions, sin, and unresolved offenses FIXES NOTHING. That is like putting ointment on top of a boil when the real problem is beneath the surface. If not resolved, it will eventually erupt again.

Frankly, one of the most damaging things to both you and the offender is to absolve the offender unilaterally (one sided) of their wrongdoing. Absolving them with a free pass only reinforces their negative behavior and enables them to continue their crimes.

How then, should Christians respond to those who have hurt them and still have not acknowledged their sin, sought forgiveness, or shown remorse? The Christian thing to do is to not ignore our feelings of anger and hurt, nor to cover things up by offering them shallow-grace, but rather to confront the offender and lay the offences at the foot of the cross, and (just like God) be ready to forgive when an offender acknowledges their wrongdoing. But whatever we do, we should never enable an offender by offering one-way forgiveness or by pretending it did not happen. If the offender is not repentant or shows no remorse, true reconciliation is not possible.

I had a reconciliation conversation this week. We picked up at the very place where we last talked two years ago. It was the only way healing could occur. The conversation went well enough and the process of reconciliation with this person has begun.
Based on what was said in that conversation I think some other people are wanting to find their way back. Looks like I'm going to be having some more conversations.

I had two friendships blow up around Christmas time in a way that put me in a sort of depression. I put so much effort into fixing it in the very way you were describing. I was trying to fix everything about myself that they told me was wrong and yet they were not willing to change themselves. Like you described I had just put a "thin glaze of christian grace" over everything hoping it would all work out. But I was hurting and ultimately all it lead to was a five month silence between us all.

I've been able to forgive them in that time, and yesterday I received a call from one of them. It's been tough deciding what I should do but after reading this I think it's important I give her a chance and hear what she has to say. Perhaps there may be some chance of reconciliation, or at the very least we will receive closure and peace about parting ways.