The Distraction Caused by Naysayers 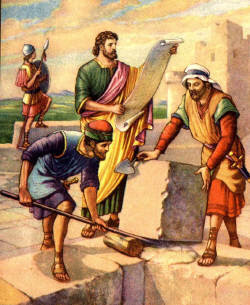 In the Old Testament a man named Nehemiah was doing a work for God – repairing a breech in the wall surrounding Jerusalem. He put together a wonderful team of workers who worked tirelessly on the project. They worked with a trowel in one hand and a sword in the other; meaning they were ready for work and ready for battle – which ever the moment called for.

This work was not without opposition thought. A group of people led by a man named Sanballat caused trouble for Nehemiah every step of the way. Their hatred and jealously for Nehemiah reached such a frenzied state that they eventually hatched a plot to murder him.

One day Sanballat and his little band of followers came to the work site. While standing on the ground they shouted up to Nehemiah who was on top of the wall, asking him to come down for a “meeting.” It was a trap. Nehemiah flatly rejected their invitation and just kept working on the project God had given him!

His exact words to them were: “I am doing a great work, so that I cannot come down: WHY SHOULD THE WORK CEASE, while I leave it, and COME DOWN to YOU? (Nehemiah 6:3). I mean, he didn’t even stop long enough to come down off the wall. In fact, Nehemiah didn’t waste his time speaking to these critics himself – he sent a messenger instead! Nehemiah knew His work was too important to become occupied with these detractors and naysayers.

I have faced the same kind of situation in my own ministry. There are plenty of people who have tried to pull me into “their agenda” when I already have one of my own. To be pulled into needless conversations, arguments, or debates, is not leadership wisdom; it is immature because it expends valuable energy and time that could be used more productively elsewhere.

For the most part I totally ignore the temptation to be drawn into someone else’s agenda or demands from outsiders that I explain myself. I don’t have the time to be “doting about words” in endless pontification. I have a church to lead; a church that requires my full time and attention; a church that is actually accomplishing something for the kingdom; a church that gives me a great deal of joy to serve. As Nehemiah said, “I am doing a great work…. Why should the work cease while I leave it and come down to you?” (Neh. 6:3).

Eventually Nehemiah’s project was completed. To celebrate, a worship service was organized. All the people were divided into two groups ON TOP OF THE WALL. One group, with a choir of singers and musicians started walking in one direction, led by Ezra. The other group of people, with another choir and musicians, headed off in the opposite direction. They walked across the top of the completed wall singing and rejoicing as they went, until they met in the center near the temple area. It was there that the service concluded with sacrifices being offered to the Lord.

And Sanballat the critic? Well, once he was ignored he just faded away.

Nehemiah must have been thinking, “I love the view from up here.”

on January 11, 2010
Email ThisBlogThis!Share to TwitterShare to FacebookShare to Pinterest
Labels: Critics