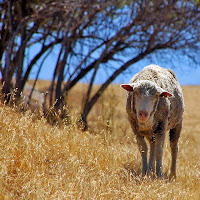 Please read this excerpt by Philip Keller, a sheep herder from South Africa. It is most insightful:

I once owned an ewe whose conduct typified the kind of Christian that never stays in one place very long. She was one of the most attractive sheep that ever belonged to me. Her body was beautifully proportioned. She had a strong constitution and an excellent coat of wool. Her head was clean, alert, well-set with bright eyes. She bore sturdy lambs that matured rapidly.

But in spite of all these attractive attributes she had one pronounced fault. She was restless – discontented – a fence crawler. So much so that I came to call here “Mrs. Gad-about.”

This one ewe produced more problems for me than all the rest of the flock combined. No matter what field or pasture the sheep were in, she would search all along the fences or shoreline (we lived by the sea) looking for a loophole she could crawl through and start to feed on the other side.

It was not that she lacked pasturage. My fields were my joy and delight. No sheep in the district had better grazing. With “Mrs. Gad-about” it was an ingrained habit. She was simply never contented with the things as they were. Often when she had forced her way through some such spot in the fence or found a way around the end of the wire at low tide on the beaches, she would end up feeding on bare, brown, burned-up pasturage of a most inferior sort.

But she never learned her lesson and continued to fence crawl time after time.

Now it would have been bad enough if she was the only one who did this. It was a sufficient problem to find her and bring her back. But the further point was that she taught her lambs the same tricks. They simply followed her example and soon were as skilled at escaping as their mother. Even worse, however, was the example she set for the other sheep. In a short time she began to lead others through the same holes and over the same dangerous paths down by the sea.

After putting up with her perverseness for a summer I finally came to a conclusion that to save the rest of the flock from becoming unsettled, she would have to go. I could not allow one obstinate, discontented ewe to ruin the whole ranch operation. It was a difficult decision to make, for I loved her in the same way I loved the rest. Her strength and beauty and alertness were a delight to the eye. But one morning I took the killing knife in hand and butchered her. Her career of fence crawling was cut short. It was the only solution to the dilemma.

There are amazing spiritual truths in this story.

on January 19, 2010
Email ThisBlogThis!Share to TwitterShare to FacebookShare to Pinterest
Labels: Sheep