The Parable of the Donkey 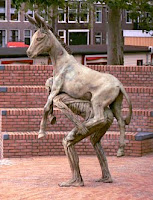 An old grandfather put his young grandson on the family donkey and begins the long journey to town. As they travel along the well-used pathway, passersby say, “Look at that selfish, spoiled kid riding the donkey while the old man is walking.”

Not wanting people to criticize his grandson, the old man trades places with the boy.

Not wanting to be called lazy, the grandfather gets off the donkey and walks along side it.

Observers begin to remark, “Look at those two stupid people walking when they could be riding the donkey.”

Acting on their criticism, the grandfather seats both himself and his grandson on the donkey.

As they continue along, the next people watching them comment, “Look how they are brutalizing that donkey. They’re going to break its back.”

In response, they get off the donkey. They put the donkey on THEIR backs, and carry it the rest of the way into town, arriving bedraggled, exhausted, and still the subject of bystander criticism.

WHAT’S THE POINT: If you try to please everyone you will soon have a donkey on your back… and then they’ll even criticize you for that. So make your decisions based upon what you know to be the right thing to do, and ignore bystanders.

on February 16, 2010
Email ThisBlogThis!Share to TwitterShare to FacebookShare to Pinterest
Labels: Leadership, Ministry