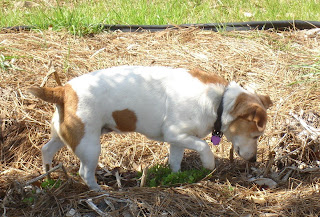 Brandy, out pet dog, died yesterday morning at home about 6:30 AM. Renae and I were right there holding her in the final moment’s right up to the end. We watched her breathe her very last breath.

I was supposed to take her back to the vet Thursday afternoon to have her put down, but didn’t. Honestly, I just didn’t want to do it - the very thought of it tormented me so much that I fretted in the night and couldn’t sleep. I didn't want to take her on that ‘final ride’ and was certain I would lose it watching her die on a stainless steel table. Instead, Renae and decided to wait one more night in the hope that she would pass away at home on her own while in familiar surroundings. We scheduled another appointment at the vet for 10:30 AM Friday in case she didn’t die easily on her own, but, thankfully, she died four hours before.

Rest assured, if Brandy had been in any significant distress or pain at any time during the week, I would have immediately rushed her to the vet to have her euthanized because it would have been the right thing to do for her. Fortunately I didn’t have to do that. Although she was in obvious discomfort, she was calm all week and mostly rested in her bed. At times she was even alert. On her final night, at some time in the middle of the night, she got out her doggie bed, walked into our bedroom and crawled under our bed – a place she liked to go to often. She slept through the night and I checked on her several times. Then about daylight she let out a whimper. Reane and I quickly got out of bed and sat on the floor near her. She crawled out closer to us. We could tell this was it. She was breathing differently now. We touched her, caressed her, and spoke to her through our tears as her breathing slowed down slower, and slower, until it finally stopped.

We were there when it happened.

on July 24, 2010
Email ThisBlogThis!Share to TwitterShare to FacebookShare to Pinterest
Labels: Brandy, Personal

Louie, what kind of dog was Precious?

Precious was a Mut, but she was the best & most loyal dog I've ever had. She was 11 when I had to have her put down. Tiger is a Mut too, not as loyal. He is a true family dog that loves everyone. Precious loved Lorraine and I, but she more loyal to me than her and we didn't have kids when we first got her.