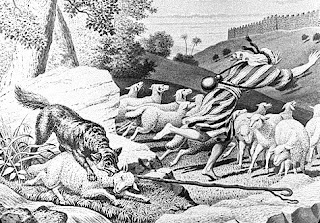 True pastors possess a “shepherd’s heart.” They live among their people as a shepherd does his flock. They will stay with the flock through thick and thin. They are long term. They last. They feed the flock, lead the flock, and protect the flock. They will fight against adversaries and will not run. He develops long lasting relationships with his flock by being involved in their lives.

It should be noted that not everyone who carries the title of “pastor” has been chosen or mantled by God for that role. Some men serving as pastors (or elders) were never called or commissioned by God to fill that spiritual office, but decided themselves it was something they wanted to do. The danger is that those who take on the role of pastor without the call of a “shepherd” are identified in the scripture as a “hireling” who will run away from the flock when wolves creep in (John 10:11-15).

Modern-day hirelings are the kind of leaders who will abandon the sheep to save themselves. They will change churches often; running from one flock to another. They will run when conflict or pressures arise. When great amounts of work and long hours are required, they bolt. When targeted for criticism, they leave. They love easy-street so much that they never stay in one place very long. They simply don’t have what it takes to see the work through. Such men often have a long string of churches in their past; each time leaving wounded and confused sheep in their wake. They don’t care that the faith of new Christians becomes shipwrecked when they leave - their agenda is self-promotion.
Ask yourself, “How many times has this guy changed churches in the last ten years?” If the answer is multiple times, then it is a good sign he will do it again. After all, if that is his pattern it cannot be denied. The facts speak for themselves. To ignore them would be foolish. So, how long do you think it will be before he leaves his present position? Just look at his history and you’ll have your answer.

on September 08, 2010
Email ThisBlogThis!Share to TwitterShare to FacebookShare to Pinterest
Labels: Pastors, Sheep