A Lot of New Churches in Santa Rosa County 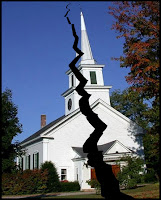 It seems like new churches are popping up all over the place in .  I’m all in favor of new churches, especially churches that are “planted” by a call of God upon the leader, or that were birthed by a mother church, or some other noble beginning.  What gets me, though, is the number of churches around here that get started as the result of a split, unresolved conflict, angry church members, pilfering the pews of another church, and by sheep stealing.
I was driving around the area recently and seen yet another "new" church that has popped up in the last few weeks.  They even have a new church sign out front showcasing themselves.  Knowing some of their history, I realized that it was not a new church after all – it was a split from another church.  Same song, same dance.  A group of people got mad with their fellow members in their home church and decided to pull out and start their own.  “We’ll show ‘em.  We’ll just start our own church and put the piano on the left side of the stage!”
Same sheep, different corral.
Instead of being happy to see this new church in the community, I was embarrassed.  I was embarrassed for Christianity, for pastors, for good Christian people, and for the cause of Christ.  It’s just one more church in this area started under bad circumstances.  There are ten gazillion churches around here with most of them running about 35-40 people, and everyone in the community knows why many of these little churches get started – conflict.  Somebody got a boxer bunch up over there at church A so they drove down the street and started church B.
Churches begun under these circumstances are monuments to a lack of unity.  They are monuments to petty bickering, childish squabbles, and immaturity.  They have less than an honorable beginning.  Sadly, the landscape is dotted with them!  It’s little wonder that very few people are attracted to these churches – their reputation repels people!  Everyone knows the history behind these churches and most people choose to have nothing to do with them!  Can you blame them?  As a consequence, these churches usually remain small, impotent, and ineffective for kingdom advancement.  It's just too hard to overcome a tarnished reputation.

Just another black eye for Christianity.

Perhaps this is why 1 Timothy 3:7 says that church leaders.... "must have a good reputation with with outsiders... to avoid disgrace.."
on April 06, 2011
Email ThisBlogThis!Share to TwitterShare to FacebookShare to Pinterest
Labels: Church, Church Growth, Church Hopper, Church Planting