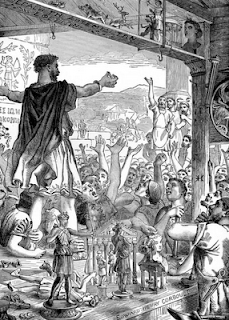 …..for a wide door for effective work has opened to me, and there are many adversaries (I Corinthians 16:9)
Open doors are opportunities for ministry, but they may also let in adversaries.  Paul had plenty of both.  He prayed for open doors, but he also encountered those who vigorously opposed him.  The two go together.
As you respond to God’s invitations, don’t be caught by surprise when adversaries try to derail your efforts.  If you concentrate too much on your opponents, you will be sidetracked from God’s activity.  Don’t base your decisions on what people are doing or saying.  Always remember, they cannot prevent you from carrying out God’s will (see Romans 8:31).
My experience has been that the most rewarding spiritual work is done in the crucible of persecution and opposition.  This principle is found in Paul’s ministry.  While Paul was in , a riot broke out in reaction to his ministry, led by a man named Demetrius.  The city theater filled with an angry mob who shouted for two hours in support of their god and against Paul. (Acts 19:23-41).  Despite this fierce rejection of the gospel, the city of became one of the chief cities from which the gospel was spread throughout , and the book of Ephesians in the New Testament is one of the greatest books in the Bible.
It takes spiritual discernment to see beyond human activity (opposition) to God’s will.  As you seek places of service, look beyond what people are saying to find out what God is doing.
Posted by Ron at Thursday, July 28, 2011