The Wheat and Tares - A Mingled Harvest 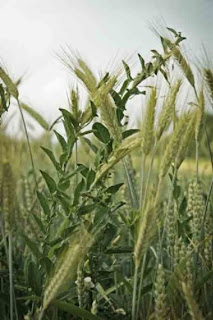 See Matthew 13:24-30; 36-43.
The meaning of this parable is not at all complicated.  Jesus is the One who plants His children in the world.  The enemy – Satan – has ruined the purity of the crop by mingling his children among those who belong to God, and sometimes you can’t tell the difference between the two. But on that final day, God will send forth His angles to separate the wheat from the tares, and He will separate Christians from non-Christians, because God knows those who are His.  Until that day arrives, we are not allowed up uproot the tares lest we uproot the wheat too.
The emphasis of this parable is not that Christians sometimes seem to be ungodly but rather that the ungodly often appear to be righteous.  It’s about pretenders… imposters… people who appear to be Christians when they are not…. and the fact that we are mingled together.
So how do you tell the difference?  According to Jesus, most of the time we can’t tell the difference.  Eventually however, you can tell the difference and here’s how:  one will bear fruit the fruit of salvation and the other will not.  Tares may look like wheat, but they cannot produce wheat grain.  And so it is in God’s kingdom…. The children of the evil one can imitate Christians but they cannot produce the fruit of salvation because they are not saved.
Clearly, it is the inherent nature within a person and the fruit they produce that separates the wheat from the tares.  One’s nature is determined by who they belong to… either they are a child of the kingdom or a child of the evil one.
Jesus said, “You shall know them by their fruits” (Matthew 7:17-20)
In the end, Christians are identified by the fruit they produce… not the claims they make.
on July 26, 2011
Email ThisBlogThis!Share to TwitterShare to FacebookShare to Pinterest
Labels: Devotional