Jesus’ last command was simple and direct, “go, make disciples.”  He then ascended into heaven, leaving the future of the church in the hands of eleven men and a few dozen other followers.  That was His strategy.  That was the entire game plan.  “Make disciples.”  There was no Plan B.

And it worked!  They pulled it off!  They made disciples everywhere they went.  And for the last two thousand years disciples have been making disciples. 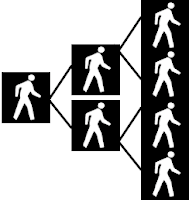 If there is one thing we must do and do well, it is to make disciples who reproduce themselves.  That is the core of our calling.

Yet very few of us are actually doing what Jesus told us to do in Matthrew 28:18-20.  Instead, the commission to "make disciples" is often interpreted in one of two ways:  (1)  Some pastors try to make disciples by emphasizing evanglism, getting people converted, and then telling them to simply “attend church.”  Or they outsourch discipleship-making to some church program.  (2)  Other pastors will simply gather established believers and attempt to “go deeper," endlessly teaching the same people over and over again, instead of teaching them to be a witness to their neighbor.

The other problem is in the pew.  Even when we succeed at developing people in spiritual formation, many of these very same people do not reproduce themselves.  Instead, they continue to depend on church leaders to provide another program or activity to keep them occupied.

I think it’s also worth nothing that Jesus commanded us to make disciples and not simply go out and find them.  Church leaders often take the easy route.  We expect disciples to materialize because we have a line-item for it the budget or preach a sermon series on the topic.  Or we launch a new program.  Or we insert the word “discipleship” in a mission statement that hangs on the wall and assume that we will crank out disciples as a result.  We speak eloquently on the subject of discipleship, congratulating ourselves for being a “discipleship church” but we actually “MAKE" precious few of them.  Most often we “FIND” them when they show up at our door from another church.

Somehow, we miss that part of Jesus’ command to “make” disciples and forget that making them is really hard work.

We must return to the story of Jesus with fresh eyes and rediscover some ancient truths – that discipleship is a process, not a program, it’s about completing spiritual workouts rather than completing a spiritual workbook.  It's about making disciples who, in turn, will go out and make disciples themselves.  That's how the kingdom is actually expanded.

This plan is simple, but it requires time and hard work.  And now, just as then, there is no Plan B.

on April 26, 2012
Email ThisBlogThis!Share to TwitterShare to FacebookShare to Pinterest
Labels: Discipleship