The person who presumes upon God’s kindness and patience, while continuing in stubbornness and an unrepentant heart, is simply storing up wrath for himself.  To stubbornly refuse God’s gracious pardon through Jesus Christ is the worst sin of all.  To do so is to greatly magnify one’s guilt by rejecting God’s goodness, presuming upon His kindness, abusing His mercy, ignoring His grace, and spurning His love.  The person who does that increases the severity of God’s wrath upon him in the day of judgment.

Yet, in the meantime God’s judgment falls upon people from time-to-time to serve as a reminder that there are consequences to sin.  Otherwise, we would go on blissfully presuming upon His grace.  The apostle Paul soberly reminded the Corinthian believers of this fact in I Corinthians 10:1-11, and ended the discourse by saying, “Now these things happened to them as an example, and they were written for our instruction.” 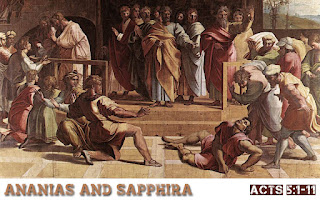 Modern man looks upon the OT, finding it impossible from a purely human perspective to explain the seemingly brutal acts of judgment on the part of God.  We are puzzled as to why God destroyed the whole world through the Flood, except for eight people.  And why did God turn ’s wife into a pillar of salt simply because she looked back?  Why did He harden Pharaoh’s heart and then punish him for his hardness?  Why did God allow the Mosaic law to prescribe the death penalty for some thirty-five different offences.  Why did He command His chosen people to annihilate and eradicate the inhabitants of ?  Why did God send a bear to kill forty children for mocking the prophet Elisha?  Why did God instantly strike Uzzah dead for trying to keep the Ark of the Covenant from falling to the ground, while at the same time allowing many grossly immoral and idolatrous Israelites to live?  Why did God not take David’s life for committing murder and adultery, both of which were capital offenses under the law?

Even in the NT, Ananias and his wife Sapphira were struck dead in a church service for lying.

If God did not occasionally exercise His judgment in this manner we would abuse His grace even more than we already do.  So He gives us periodic reminders of the consequences of sin.

Every day we live we should thank the Lord for being so patient and merciful with us, overlooking the many sins for which we deserve His justice.

on June 01, 2012
Email ThisBlogThis!Share to TwitterShare to FacebookShare to Pinterest
Labels: Devotional