Rip Your Heart, Not Your Clothes 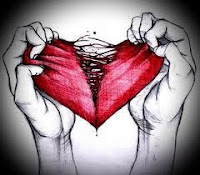 “Even now,” declares the Lord, “return to me with all your heart, with fasting and weeping and mourning.”  Rend your heart and not your garments.  (Joel 2:12-13 NIV) Return to the Lord your God, for he is gracious and compassionate, slow to anger and abounding in love, and he relents from sending calamity.

In the book of Joel, the prophet calls the people of to repentance.  God wants His wayward people to return to Him, but He wants their whole hearts.  He doesn’t want mere external expression of repentance, such as tearing ones clothes as a sign of grief.

So He says, “rend your heart.”  In other words, be torn up on the inside.  Fast, weep, and mourn, but do it for real.  Enough of this fake stuff – fake religion and fake repentance.

on July 19, 2012
Email ThisBlogThis!Share to TwitterShare to FacebookShare to Pinterest
Labels: Devotional