The Tyranny of Always Striving for the Next Level 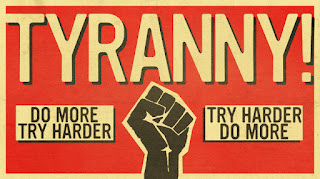 PCC got off to a good start on our very first Sunday in 1998.  After that, it took a couple of years to really start growing.  Before long we were breaking attendance barriers, seeing people come to Christ, baptizing scores of new believers, and discipling them.  At one point we were consistently running 500 hundred in attendance, which made us larger than 95% of the churches in .  We actually had a peak attendance of 1,200 one Easter Sunday a few years ago.  In a town of 20,000.

No matter how much we accomplished, it was never enough.  This thing of “finally getting there” was too elusive.  I particularly remember when we crossed the 200-threshold – it didn’t feel anything like I thought it would.  It was dry and disappointing for me.  I quickly realized that it meant more people to take care of, more to do, and not enough resources to cover the bases.  So I pushed myself to break the next threshold thinking it would be better when we got there.  It wasn’t.

When you go to another level you have to face another set of devils.  You still have all the same issues to contend with, but now there are more zeros behind the number.

There’s nothing wrong with growth.  In fact, NT churches should grow.  But they should also grow in a healthy manner.  For me, focusing too much on the next level was harmful.

Next-level thinking kept me from appreciating where we were because I was constantly focusing on what was next.  Trying to get to the 700-800 level kept me from rejoicing over the 450-500 people God had already sent us.  Even the church bulletin or Sunday announcements was always about what’s next and what’s coming, rather than taking time to celebrate where we were - as if we had to give the impression that "things are always happnin at PCC."

Even worse, next-level thinking kept me from focusing on my own health – both spiritually and physically.  My soul dried up more times than it should have.  I almost burned out.  There was some church conflict that messed me up for a while too.  And throwing in the added dynamic of personal and family challenges that are common to us all, it was almost too much to bear.  I was lost in the middle of too much clutter.

So I embarked on a journey of fixing things by first fixing myself.  Somehow I found my bearings again and started to get healthy.  I reconnected with God and myself.  But I quickly found out that not everyone in our church was on-board with me to simplify.  After all, I had been leading this way for years and now I was trying to un-ring the bell.

The good news is that we’ve been able to neutralize this tyrannical striving for the next level.  I taught, led, pleaded, fought, argued, and hammered it out until people began to see the wisdom of slowing down.  Yes, it has resulted in the departure of a few people who have found other places to attend.  But for PCC it has been a good thing.  Our church is at a manageable size right now – we are “right sized” – in proportion to our facilities, resources, staff, and ability to shepherd our congregation.

And we are much healthier.

God is not against church growth.  Neither am I.  In fact, I look forward to the day when we regain that kind of momentum again.  But if or when that happens, we grow to the next level by the breath of God.  It will occur naturally as a sovereign move of God's Spirit and it will not be forced by me or anyone else.

In the meantime, we will simply make disciples, shepherd our flock, and worship God.

on July 20, 2012
Email ThisBlogThis!Share to TwitterShare to FacebookShare to Pinterest
Labels: Burnout, Keep It Simple

" The Speed of Going Slow " is a phrase I ofter heard from a very smart co-worker, sad thing is it took nearly 30 years to sink in!

"The Speed of Going Slow" - those are words of wisdom.

This post is very pertinent to my life as well as our church. Thank you for reiterating what I know I need to do. So thankful for each & every blessing in my life but ready to slow down and grow inside. God needs more of me!