Does Everything Happen for a Reason? (5) 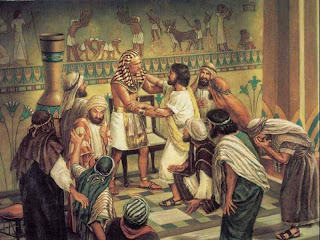 Obviously, there are situations where God DOES take something bad and uses it to produce something good. The ultimate example of this, of course, is the crucifixion of Jesus Christ.

Another instance can be found in the misfortunes of Joseph and his subsequent rise to power in Egypt. God was obviously at work behind the scenes when Joseph was sold into slavery by his own brothers, falsely accused of attempted rape, jailed, primed for early release, summarily forgotten, and finally brought before Pharaoh to interpret a bizarre dream.

When Joseph’s brothers eventually came to ask him for mercy despite their treachery of selling him into slavery, he responded with these famous words, “….ye thought evil against me; but God meant it unto good, to bring to pass, as it is this day, to save much people alive” (Genesis 50:20 KJV).

With 20/20 hindsight, it’s easy to see that God used the the brothers’ betrayal to position Joseph for a high office in Egypt. In the process, God provided food for Joseph’s family, saving them from starvation, so that they eventually grew into a great nation - Israel.
Yet there is no indication that Joseph KNEW that God was doing any of this while he was suffering the misfortunes imposed upon him by his brothers. Joseph had no clue whether or not God was up to something special. He just knew that righteousness was the only path to take no matter what life was dishing out to him! It was only AFTER his brothers came to him begging for food that Joseph REALIZED God had been at work behind the scenes to bring about good. Not that God caused it, but that God was always at work despite his brothers' sin. Big difference between the two.

THE FACT IS, just as it was for Joseph, it is NEARLY IMPOSSIBLE for us to DISTINGUISH which painful events in our lives the result of God’s orchestration. And if the truth be known, it doesn’t really matter. Every trial or hardship calls for the same response from us – OBEDIENCE. We are supposed to do the right thing no matter what the outcome, or no matter the cause. Sometimes, as in the case of Joseph, we will be rewarded in this life. Sometimes we will be rewarded in the next. In either case, obedience is the only path for the Christian to follow.

I understand the tendency to believe that God is directly responsible for everything that happens. I wrestle with this myself. It’s one of the ways we make sense of the (seemingly) random events and misfortunes that come against us. “Why did this happen to me? Surely, there has to be a reason for it” we think. It’s how we cope in this world of evil. But this is looking for a silver lining that may, or may not be there. Kind of like the child who always sees a funny face in the clouds when the rest of us can't see it. Emotionally it might appear to be a good thing to do. After all, it's good to stay postive. But the disappointment can be crushing when the harsh reality of truths sets in. When life falls apart, there is something more important to look for than a silver lining. Once again, it’s the path of obedience.

The path of obedience ALWAYS TAKES THE HIGH ROAD. It always tells the truth even if the truth is inconvenient. It refuses to return evil for evil, even when vengeance is within reach. It walks with integrity, even when no one else does. It does the right thing, even when life doesn’t work out so well.

Bottom line: God hasn’t promised that everything will work out in THIS life. Many Christians have been put to the edge of the sword without being delivered. Yet they “obtained a good report” through faith, and “RECEIVED NOT the promise” (Hebrew 11:39). But God HAS promised us that, no matter what happens, He will never forsake us (Hebrews 13:5).

In Romans 8:28 (the passage this five-part series has been about) God has promised that no matter what life, or the enemy, might throw our way, He is always at work and His purposes for our lives will not be thwarted.

It helps no one but the enemy.

37Nay, in all these things we are more than conquerors through him that loved us. 38For I am persuaded, that neither death, nor life, nor angels, nor principalities, nor powers, nor things present, nor things to come, 39Nor height, nor depth, nor any other creature, shall be able to separate us from the love of God, which is in Christ Jesus our Lord. (Romans 8:37-39)

on November 24, 2009
Email ThisBlogThis!Share to TwitterShare to FacebookShare to Pinterest
Labels: Devotional, Sovereignty