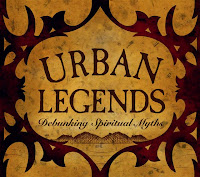 For the last nine months I have been thinking of doing a sermon series (in Jan) on some popular myths that Christians believe. Here’s why. Many Christians, both new and mature, have a tendency to trust in promises that God never made. Then when God doesn’t come through on those ‘promises’, some are likely to become angry at God and depart from the faith.

This sermon series would be intended to shatter some of our faulty belief systems and would not be for the faint of heart. It might even strike at the core of some things you believe and hold dear. If we can be taught the truth, (instead of embracing our spiritual urban legends), our faith IN GOD will strengthened.

Holding to beliefs that are 'partially' based on the scritpures (instead of fully based) is very dangerous. Furthermore, it fosters a lot of pretenders or dabblers in the faith who try to play by the rules of good-luck Christianity, but do not really abide in Christ.

I’m thinking the series might be called “Myth Busters” or “We Demolish Arguments” or “Spiritual Urban Legends.”

Here are some myths that should be shattered:

These topics are PARTIAL TRUTHS with a Biblical basis... but we should NOT be building the WHOLE HOUSE on them. Sometimes we treat the Bible as a collection of pithy sayings and sound bites that you would put on T shirts and coffee mugs. That's fine. But don't build your house on them. The Bible is a big book... not a laundry list of verses to be taken out of context... and it has a lot more to say about the sobering reality of the Christian life than our modern day clichés. Context is always better than a proof text.

on November 06, 2009
Email ThisBlogThis!Share to TwitterShare to FacebookShare to Pinterest
Labels: Church

Pastor Ron, I really like this idea that you have for Jan., sounds interesting to me. In fact you mentioned something that I wanted to ask you about. That Christians shouldn't judge anything. When I read that Christians are to judge everything. So I am excited about this..But what ever you do, will be great...Barbara Slate

I'm glad to see that you have an interest in this series. I think the topics I mentioned are important enough to publically adress... and will probably do so.