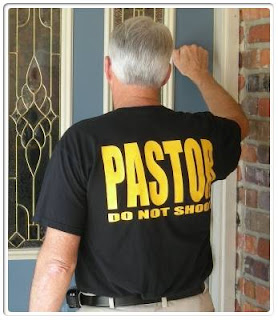 It has been my privilege to serve in the ministry for most of my adult life, and for the last twelve years at PCC (my favorite church of all time). However, the ministry does have its challenges.

Today, all too often the demands upon a pastor exceed what they should really be doing. The pastor is traditionally considered a church’s head of “everything.” He is the spiritual leader, administrative overseer, church Chaplin, the legal corporation president – and basically the know-it-all and do-it-all “chief cook and bottle washer.” In small churches, the pastor will conduct all the services, lead the singing, do all the preaching, handle all the visitation & counseling, as well as be the Sunday School Superintendent. He will probably also be responsible for the office work, bookkeeping, janitorial, maintenance, and building repair.

This is not the way it should be. Ideally the pastor should be the spiritual overseer, devoting his attention and energies to the priorities of prayer and teaching of God’s Word, while delegating the load of administrative tasks, details, and responsibilities to other personnel. In too many cases, the pastor has to do far more than he was ever called for or even trained to do.

The rewards of being a pastor are many. Without question, it is a high honor to be called of God into this office. However, pastoring a church is a vocation of extreme contrasts – it is often wonderful and terrible in the same package.

Some of the greatest challenges of being a pastor are:

BEING MISUNDERSTOOD. For the most part, the life and ministry of a pastor is not really understood by the average person. In truth, the only people in the world who truly understand the life of pastor are other pastors.

Being a pastor isn't a job, it's what a person is. When God calls a person to be a pastor, He places in him a shepherd's nature and characteristics — to love and care for His flock. He is a pastor all the time. It's what he thinks about, what he lives for, his purpose on the earth. It's not possible for him to go home at the end of a day and leave his job behind the way that most people can. His, is an all consuming task. The pastor is on duty twenty four hours a day, seven days a week. He frequently receives phone calls at home from morning to evening, and often in the middle of the night. Most of his home activities are related to the church. Most social calls or relationships are church related.

COPING WITH CRITICISM. Like most other public figures, a pastor and his family live in the public eye, like a "fish bowl" where people watch them constantly, frequently viewing them with criticism and cynicism. People who enter the ministry must be prepared to face much criticism, sometimes of a brutal and cruel nature. However, all those who have risen in leadership or accomplishment know well the sting of their critics. It seems that many people have a different opinion of what they think the pastor should be doing.

FACED WITH AN OVERWHELMING TASK. It's been said that 80% of the work of the church is done by 20% of the people. But when you realize that the majority of American churches have fewer than 100 people, you can imagine that the pastor and his family often make up a great portion of that 20%. A pastor’s life is one of constant distractions, receiving dozens of calls and letters each day, and expected always to drop anything he's doing to sympathize, counsel, or encourage those who ask his help. The pastor seldom has enough time to do everything — time is always one of his greatest needs.

The average pastor often feels overwhelmed and lonely in his task. He beats out his brains in the pulpit week after week to make a difference in people's lives trying in vain to motivate a sullen pack of foot dragging spiritual adolescents who never quite seem to see the big picture, never get excited enough to shoulder responsibilities, and never come anywhere close to a full 10% tithe.

RESISTING MANIPULATION. For many, this will sound unbelievable. But the pastor is a frequent target of manipulation and control. Sometimes people unintentionally take advantage of a pastor's willing heart, and make requests and demands that begin to dominate his personal life. And then there are others who view the pastor like a politician, trying to lobby his favor or influence to attain a position, to favor their opinion, etc. But there are those who have a definite personality profile that feeds on being in control, and if they can't get the pastor to do what they want, they'll often turn on him and try to run him out.

Because of this or other sour experiences with people, pastors will sometimes distance themselves from close personal relationships. They may even refuse favors or monetary gifts directly from persons, unless they are given anonymously, since such gifts often have strings attached — perhaps unintentionally, the giver will often expect preferred treatment, recognition, or to have a "special influence" in the pastor's decisions.

COPING WITH EMOTIONAL CONFLICT. Pastor’s often face emotional challenges and conflicts that he was never prepared for. This unique man entered the ministry out of his divine calling, and his love for people, only to become very suprised to learn that shepherding people was a life filled with wounds, hurts, and disappointment.

As the pastor faces his daily tasks, he will begin to ride an emotional roller-coaster. With each person he counsels or prays with, he will experience a momentary bond with their circumstances or burdens. During the course of a day he may console someone with a terminal illness, listen to trivial complaints, meet with a couple to discuss their marriage plans, or find it necessary to correct someone for their sinful lifestyle. He will go from one contrasting situation to another, and then within a short period, he will have to find a way to restore his composure from all these concerns to preach an encouraging, heartfelt sermon to the congregation.

Most others who deal with repeated crisis or trauma eventually learn how to develop a callousness in order to cope with the emotional upheaval of their jobs. Paramedics, police officers, or emergency room workers understand this all too well. However, when a pastor deals with a daily assortment of similar urgency's, unlike other emergency workers, he cannot distance his feelings from crisis. He cannot allow himself to become callous to protect his emotions from becoming involved. It’s the nature of his calling and his job to care. His flock expects him to be sensitive, a person of genuine compassion, to feel their hurts and to share their burdens.

DEALING WITH DISAPPOINTMENT. Furthermore, during his ministry, he will experience many disappointments and heartaches with people. Many will fail to do what they promised and disappoint him. Others will criticize, judge, speak against him, betray him or even seek to ruin him or his family. Some will try to gain his friendship for ulterior motives — to manipulate his influence for their own agenda. Many of those whom he loves will eventually leave the church for some reason... some will move away, others may backslide, become offended, or simply reject his ministry. Dozens of times, he will experience the loss of beloved members of the flock through death. Many, many are the wounds of a shepherd, that the flock never really understands.

STANDING AGAINST SATANIC ATTACK. The pastor and his family are targets of Satan’s attacks. The strategy is simple, yet intelligent - if he can overturn the shepherd with temptations or trials, he can likely scatter the sheep. According to insurance statistics, ministers experience an unusually high rate of stress related illnesses (such as ulcers and nervous conditions), depression, marital difficulties, conflict with their children or family, financial problems, and so on. To complicate matters further, if he does face such challenges, some will criticize him as a spiritual failure.

In light of these challenges, a pastor must have perseverance. There will be numerous temptations for the pastor to simply quit. He must be a person of tremendous faith and prayer to overcome the many challenges — to set his face as a stone, with unflinching determination and steadfastness. The average layman will never realize the price his pastor must pay to be his shepherd — the heartaches he will endure to minister to men’s souls. Jesus, the Great Shepherd was a man acquainted with grief and sorrow, despised and rejected, and His under-shepherds and pastors also identify with these characteristics.

on November 04, 2009
Email ThisBlogThis!Share to TwitterShare to FacebookShare to Pinterest
Labels: Pastors

Ronnie, all of this and more is so true...and more. I experienced much of this in my brief, (6 1/2 years), of service as children's pastor. Know that our prayers are for you, Renae, and all who serve the Lord in ministry at PCC - and throughout the world.

And for all of us to remember to "... honor those who are your leaders in the Lord’s work. They work hard among you and give you spiritual guidance. Show them great respect and wholehearted love because of their work. And live peacefully with each other."
1 Thessalonians 5:11-13

Cathy, thanks for the encouragement!

Normally I post early in the morning each day, but today I waited all day long before posting this topic; I wanted to be sure it felt right before going public. Fortunately for me I don't have too much of the negative stuff going on right now, and the ministry is more enjoyable than burdensome. Our church and its people help make this possible.