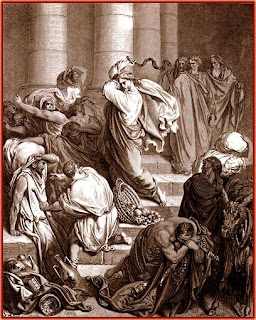 When it was almost time for the Jewish Passover, Jesus went up to Jerusalem. In the temple courts he found men selling cattle, sheep and doves, and others sitting at tables exchanging money. So he made a whip out of cords, and drove all from the temple area, both sheep and cattle; he scattered the coins of the money changers and overturned their tables. - John 2:13-15

We often visualize Jesus as being soft spoken with a gentle manner, and letting children sit on His knee. The problem with that image is that it is only half the picture. There is another side to Jesus we find in Scripture… the side that allowed Him to verbally lash out at the religious leaders of the day… that allowed him to take a whip and drive the money changers out of the temple and kick their tables over.

Jesus didn’t go around always trying to be Mr. Nice Guy. Sometimes things ticked Him off and He let it be known that He was ticked off. He called people vipers, two-fold children of hell, blind guides, fools, full of dead men’s bones, full of iniquity, and a bunch of serpents whose damnation slumbers not. He took a swing at injustice in His Father’s House and encouraged people to ignore their Jewish leaders.
Quite frankly, He clearly understood, taught, and demonstrated for us that there was a time for righteous indignation when it was not necessary to turn the other cheek.

on January 31, 2011
Email ThisBlogThis!Share to TwitterShare to FacebookShare to Pinterest
Labels: Ministry