The World is in Birth Pangs 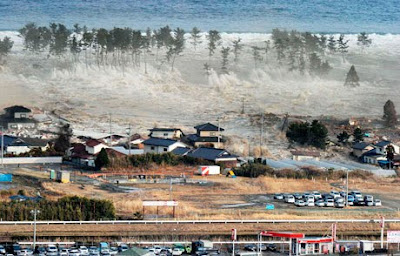 And there shall be signs in the sun, and in the moon, and in the stars; and upon the earth distress of nations, with perplexity; the sea and the waves roaring; (Luke 21:25 KJV)

For nation shall rise against nation, and kingdom against kingdom: and there shall be famines, and pestilences, and earthquakes, in divers places. All these are the beginning of sorrows(Matthew 24:7-8)

For we know that the whole creation groaneth and travaileth in pain together until now. (Romans 8:22 KJV)

In the last several weeks there has been revolution in the Middle East as general uprisings have occurred by the citizens of theses countries to overthrow their dictatorship governments. Like dominos it has spread from nation to nation, almost in a cascading effect.

Three weeks ago there was an earthquake in New Zealand. Today there was another in Japan that was 8000 times stronger, and was the strongest worldwide in the last century. Tsunamis have spread across the Pacific. In 2004 the same thing happened in the South Pacific.

Then there were the attacks on 9-11 in 2001. As a result, we have been at war with Islamic extremists for the last decade.

Read the above scriptures and draw your own conclusion. Myself, I think something is happening and it's got my attention.

on March 11, 2011
Email ThisBlogThis!Share to TwitterShare to FacebookShare to Pinterest
Labels: End Times