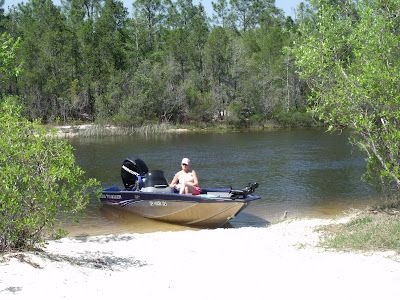 Saturday was a good day me and Renae.  We went to Spanish Ft to pick up our boat which was having a little work done on it.  After we got home I spent the rest of the day rigging the boat and getting it ready for water.

I have started the project of re-sodding my lawn.  On Friday I rented a sod cutter and cut up the front yard.  Then I began pulling up the old sod which is very labor-intensive.  As I looked at the enormity of this job, it was overwhelming.  Originally I was going to hire a landscaping company, but after making contact with two companies and growing frustrated with their slow response, I have decided to do it myself.  Besides, I’m low on money.  We had our taxes prepared last week and discovered that we have to pay in this year – a lot more than we were prepared for!  It was a shocker.  That’s what happens when your kids grow up and you can no longer claim them as an exemption.

I cut the coaxial cable to my TV with the sod cutter.

I cut the electrical cable to my sprinkler system with the sod cutter.

I’m too old for this level of labor-intensive work.  The upside is that I’m going to lose weight before this project is over.

After this sodding project is completed, we are having new carpet put in the house.  After that a “for sale” sign goes up in the front yard.

Renae cooked an amazing meal Saturday; BBQ baby back ribs, corn on the cob, steamed cabbage, potato salad, BBQ beans, and a fruit salad.  She made enough for two days… which is what we are having for lunch today after church.  It’s a lot of fun to hang around the house on our day off and do that kind of thing.

My father died seven years ago, last Thursday.  I miss him.

I preformed a wedding-vow-renewal ceremony Friday night for a couple in our church – Steve & Cheryl S.  It was a backyard-garden event and very, very nice.  Renae and I thoroughly enjoyed ourselves.  There were about fifteen people attending, which made the experience very intimate.  We met some interesting people that night too!  One man, who was from , told me about his work of developing Unmanned Ariel Vehicles (UAV) for use in and .  I was fascinated.  He works at Eglin Air Force Base.

Also present that night was an old friend of mine who I have not seen in seven or eight years.  It was great bumping into him, and quite a surprise.  His name is Howard, and he just retired from the Army as a Lt. Colonel.  He’s a great guy and a very good Christian too.  I used to small group with him.

One couple from our church said to me, “It’s great to see you and Renae away from church and to be able to spend time with you in a social setting.”  That kinda got my attention.  We used to do a lot of that – when we were a much smaller church – but it has become increasingly difficult as our church has grown.  I’m going to be more deliberate about doing more of this kind of thing.

My Jack Russell Terrier who suffered an eye injury several weeks ago is doing very well right now.  Although the eye is still intact, I think he is blind in that eye, or has very limited vision.  Yet, in spite of it all, the dog has not slowed down a bit.  His personality is still the same; aggressive and full of energy.  Love that dog.

My female Jack Russell (still a puppy) may not be pregnant after all.  Still have my fingers crossed.  If she is pregnant and does have puppies, I am thinking about giving them away…. but only to Jack Russell Terrier OWNERS.  It takes a dedicated pet owner to handle this breed of dog.  They are NOT apartment dogs.  They are hunters, aggressive, and hyper-active.  The best part:  they are eager to please their owners.

A pastor I know admitted to an affair last week. I wrote about it last Sunday night in lieu of the Mind Dump.  It has been on-going for 28 months, involving a female staff member in the same church.  I hate it for him, his wife, his children, as well as the other woman, her husband, their children, the church, and for the cause of Christ.  He has been removed.  She has been removed.  The church is reeling.  The devil is having a heyday.  The internet is lit up like a Christmas tree.  DANG!

Pastor Brian Bloye has stepped in to administer discipline & grace, and has taken supervision of the church.

Almost every week I hear of someone who falls into this trap.  In fact, just this week alone, no fewer than three incidents like this came to my attention.  What the heck are people thinking!

Over and over again I am confronted with people who get tangled up in these kinds of situations.  What astonishes me most is how EASILY some people cross this line.

I would encourage you to read PROVERBS chapter 5 and 6 and soak in the warnings against lust and illicit sex.  “Can a man take fire into his bosom and not be burned?” (6:27).  THE ANSWER IS NO – you can’t.  You WILL be burned!

I have lived by these self-imposed rules all of my married life – for almost 30 years – and it’s been good for me. This may sound rigid to most people, (especially worldly-minded people), but Integrity Convictions will protect you.

At the end of the day all the safeguards in the world mean nothing unless you truly fear God and have a working plan to nourish your soul.

I received a couple of e-mails last week that would blow your mind.

Sometimes I am reluctant to open my e-mail mailbox.  I never know what’s waiting on me.

People could avoid so much trouble if they would only live right.

Love = your wife waking you from a dead sleep because she wants breakfast and you do what you are told.

I’m going to start bike riding as part of my workout routine.  There’s something about rocking in spandex that makes stress go away.

For the last year or so I have been thinking a lot about “Succession Planning.”  That is:  Who takes my place when I’m gone, and who takes the place of other key leaders?  What happens if any one of us suddenly becomes incapacitated?  I will be writing about it soon.  This is very important.

Today’s church service was perfect.  The new times were a big hit – they created a whole new feel and the feeling was good.

Attendance was solid (423).  The best part was that the second service actually increased in attendance.  We think this was a very good move for us to make.

We also received a lot of positive feedback from the children’s ministry environments.  Parents are very happy right now!  This is a big, big win for us.

The worship band HIT IT OUT OF THE PARK TODAY!  I especially enjoyed the new song – Christ is Risen.  It was the 3rd song in the worship set.

A couple of men cut the grass Friday.  The campus grounds looked real good today.  I love it when people take ownership of their ministry and their church.  The pride they take in their work really shows too.  The hospitality & housekeeping team is a first-class group of people too.  I notice the work they do even when they don't realize they are being watched.  PCC has some of the most amazing people I've ever seen - they are untiring in the extreme.

The Joseph series has been a big hit with a lot of people.  I’m getting consistent positive feedback every week.

Next Sunday Joseph’s brothers (who betrayed him) re-enter the picture.  This is the meat of the matter.

The part about Manasseh and Ephraim really spoke to.  i.e., God has made me to forget all my troubles in my father’s household  AND God has made me twice fruitful in the land of my suffering.

I really felt a God-moment.

Renae and I went out in the boat today after church.  We spent the afternoon on .  ’s and lot’s of people in boats today, parked on sandbars, pontoon boats, picnics, etc.

We bumped into several church members from PCC on the river too.

Can you believe the price of gas?  I filled up yesterday at 3.65 per gallon and the prices are still rising!

It was good to see Daniel and Paige Q. walk into service today.  They are a military couple; he is an aviator in the Marine Corps.   They used to attend PCC until they were transferred to .  Now he is under orders to be deployed to .  They came home on leave and dropped into service with us.  It was a pure delight to see them both.  Offer your prayers for them.

Good things are ahead for PCC.

Shirley, thank you for your comments. They appear in the blog "What to do During Church."

We had a great Sunday all the way around!