Theology can be broken down into three basic parts:
1. The study of God
2.  The truthfulness of religion in general
3.  An organized method of interpreting scripture

It’s the first part that gives most people problems.  We have a tendency to put most of our energy into parts 2 and 3 (the study of religion and our methods of interpretation) rather than studying more about God Himself. 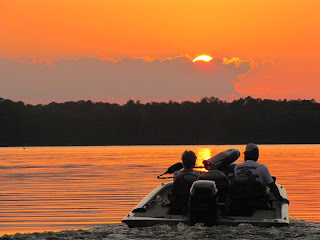 I like to go fishing.  Last year Renae and I went fishing at least two times each month for ten months straight.  To spend this much time on the water is to experience God in a way you don't learn in books.  Let me explain.  While on the water we would see magnificent sunsets and sunrises (and yes, that is an actual picture my wife took while we were on a fishing trip).  We would watch as redfish fed on schools of menhaden near the bank.  There were alligators, and osprey’s swooping down to the surface of the water and snatching up large fish for a meal.  We seen schools of mullet one hundred feet wide, and heron’s skimming across the surface of the water looking for a meal.  Several times we had porpoises following our boat and jumping out of the water nearby.  And I could always hear the gentle lap of water against the reeds in the marsh.

I was struck with the fact that this incredible scene is played out every night throughout the entire world.  And every night God sees this scene and certainly takes joy in it.  I thought about the fact that God could have stopped with nature, during creation, and simply enjoyed sunsets and sunrises, and snow and mountains, and ocean and fish, and birds and animals every day for eternity.  He had a perfect creation.  But He didn’t stop.

So I guess for me, at least right now, the study of God (theology) is more about the tidal movements in and obscure places like Scavanes Point, rather than a systematic method of interpretation of spiritual works.  I'm pretty full of that.  I even have a full library to draw from.

Don’t’ get me wrong.  I love systematic theology and methods of interpretation.  As a preacher I wouldn’t be worth my salt if I didn’t.  But quite frankly, most of it is very slanted, depending on who wrote it.  So this year (again) I am going to focus again on watching God’s creation, listening for God’s voice, simply reading His Word, and trying to understand this One who created tidal movements, atheists, and me.

on January 31, 2012
Email ThisBlogThis!Share to TwitterShare to FacebookShare to Pinterest
Labels: Theology

Ha! Thanks Rob. I guess I was too caught up in the Birds & Bees to catch that typo. Besides, my spell-check didn't catch it either.