Tomatoes & a Lot of Other Veggies 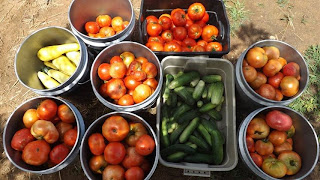 TOMATOES.  Last year I had an abundance of tomatoes, so this year I decided to plant even more.  I planted about 90 tomatoes plants, both determinate (bush type) and indeterminate (a true vine).

The production has been insane.  I pick them by the bucket full.  Having so many fresh tomatoes is a real joy for us.  We have given away a lot of them to family and friends too.  Also, Renae and her mother have canned about 40 jars.  I expect the indeterminate tomatoes to keep producing until fall.  The canned tomatoes will get us through the winter, providing us with lots of tomatoe gravy and spaghetti sauce.

FIELD PEAS.  Field peas are coming in.  I have planted brown crowders (my favorite), black crowders, and lady peas.  I picked ten gallons earlier this week and spent the afternoon shelling them.  I have six rows of peas, and each row is 100’ long.

ONIONS.  I harvested about 300 onions (both red and yellow).  Some of them are as large as a softball.  No kidding.  They are called Candy Onions and easy to grow in the South.  They are mild in flavor (like Vidalia onions) and suited for making onion rings (as well as seasoning).  I won’t plant so many next year.  I over-planted this year to compensate for loss and ensure that I would get a few in the end – but I got 100% of what I planted.  Highly recommended.

OTHER VEGGIES.  Had lots of squash come in, but it’s about over.  I’m thinking of planting summer squash (zucchini).

My cucumber plants did not do as well this year as they did last year, but we did get to pick a lot of cucumbers and slicing cukes.  Renae and her mother also canned several quart jars of pickles.

I have thousands of peppers.  Yes, thousands.  Nuff said.

Japanese eggplant.  Beautiful fruit, but not sure I like it.

Elephant Garlic – you wouldn’t believe the size of this stuff.  The cloves are enormous.

FREEZING.  In the last two weeks Renae and I have spent a lot of time blanching corn and peas (that we purchased from Steve’s Farm in Walnut Hill) and then putting them in the freezer.  We have two freezers that are now full.  We’ll eat fresh produce from my garden until fall and then use the food in the freezer to get through winter.

BLUE BERRIES.  My blueberry bushes did not do as well as I hoped.  The birds and deer stripped them clean.

FIGS.  I have two small fig trees that are putting on right now.

MUSCADINE GRAPES.  Grapes are putting on too.

Sharing God's blessing by sharing what I learn and what I grow.