Just Before the Return of Jesus 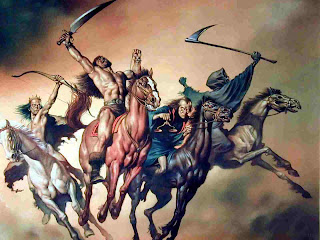 34 “But take heed to yourselves, lest your hearts be weighed down with carousing, drunkenness, and cares of this life, and that Day come on you unexpectedly. 35 For it will come as a snare on all those who dwell on the face of the whole earth (Luke 21:34-35 NKJV)

1 Now, brethren, concerning the coming of our Lord Jesus Christ and our gathering together to Him…..3 Let no one deceive you by any means; for that Day will not come unless the falling away comes first, and the man of sin is revealed, the son of perdition, (2 Thessalonians 2:1,3 NKJV).

The Bible actually paints a very grim picture of the future. We are told that a day of judgment is coming suddenly that will be like a snare, or a trap, that will snap shut on “ALL those who dwell on the face of the earth.” Under a strong delusion of lies and false doctrines, many will fall away from the faith giving heed to seducing spirits, which will prepare the way for the antichrist (the son of perdition) to make his appearance for world dominion.

It is only reasonable to assume that these warnings, and others like them, have been given to help us recognize the times in which we live. When the Bible describes “the last days,” it does so with the obvious intent that some generation at some point in history will be able to recognize that the end is near, even at the door.

Even if I didn’t know anything about prophecy, I would know enough from observing what is going on in our world to realize that we are headed toward a catastrophe. One day, perhaps in our lifetime, the four horsemen of the apocalypse will be loosed upon the earth to carry out their purposes. Like ghostly figures, they appeared to John as demonic horsemen who came from the dungeons of the damned to bring about human suffering on the inhabitants of the earth on a cataclysmic scale (Revelation 6:1-8).

on April 02, 2009
Email ThisBlogThis!Share to TwitterShare to FacebookShare to Pinterest
Labels: Devotional