Expectations in the Ministry 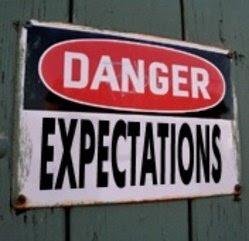 He arrived at PCC at a critical time. Very quickly we became friends and co-laborers in the work of the ministry. There were things that we simply could not have accomplished without his help. I thought this person would eventually be on full time staff with us. It was exciting.

Having been in the ministry about twenty years by the time he showed up at PCC gave me ample opportunity to meet and encounter a large cross section of church people. This particular man, we’ll call him Vince, seemed like an answer to prayer for me. In many respects he was; we worked together, shared meals together, traveled together, and even spent time in each others homes. I was investing in him, preparing him for a greater role at our church. I felt a friendship being forged that I thought would last a lifetime. He often said, “I’ve got your back. I’ll be there until the end. When we are both old, I’ll roll you in to the services at PCC in a wheel chair.” I believed it.

Then it came time for our annual evaluations. Each year, all our ministries, ministry leaders, and staff are evaluated on performance, effectiveness, and fruitfulness. This helps us determine what changes or improvements need to be made, and how much funding a ministry will receive for the following year. Since this man had become the head of a ministry department (after moving into our building) and had been leading it for 14 months, it was time for his evaluation. I specifically remember sitting in a staff meeting reminding everyone that evaluation time had arrived, and saying, “Vince, this will be your first time to be evaluated. As you know, everyone else in this room goes through this process each year, and since you helped write this performance evaluation policy yourself, you shouldn’t have any problems with it. Right?” Well, he acted ugly and really showed himself. It became apparent to everyone in the room that he had some real issues and was very unhappy. I steadied myself, (and friendship or not), said, “You wrote this policy and you are subject to it just like everyone else.”

About two weeks later I attended one of his ministry meetings (to make observations and begin the evaluation process) and to my utter astonishment this program was barely hanging on by a thread! It had started with a public launch, pastoral support, a three-week sermon series to get it going, a 5k budget, and about 50 people. I threw my full weight behind this effort. Yet, this ministry was now down to six people! Six people! Not only that, most of the budget had been used up and additional expenses were being incurred that the church had to bear (which was draining resources from other areas). To make matters worse, he wanted to go on a very large end-of-year spending spree (for advertisement) that would hopefully salvage this ministry that he had single handedly driven into the ground. That’s when I knew that I needed to step in and put the brakes on.

We were in a dilemma; this ministry had become a funnel for money and was an enormous drain on our church's limited resources - plus it was not living up to anyone's expectations. Not a good combination. We were bleeding at the seams and needed to stop the hemorrhaging. My recommendation to our leadership team (in previous weeks) was this - since the program has already shrunk down to a handful of people it should be restructured accordingly. There was simply no justification for a ministry that was on the brink of failure to receive that kind of funding for the following year, in an attempt to "relaunch" it and try agian. I also recommended that this program be “right sized” to fit within our small groups system, making it a better organizational fit for our church. That way it would no longer be a competing system, competing with other ministries in our church (that were more fruitful) for resources, funding, building usage, and utilities. Under this new structure the program would be allowed to continue and still be a blessing to its group members. For Vince, it would mean that he would not have to carry such a large work load any longer (on top of his full time secular employment), probably making him more effective as a ministry leader. After showing up at the ministry meeting that night, it was apparent (and confirmed) that he did not have the gifting or talent to make this ministry become as large as he dreamed it would become (no matter how much funding he had). I knew this was going to be a tough evaluation.

I never got the chance.
The next morning when I came into work (at the church offices) I discovered Vince had left our church. When I walked into the administrative area, there on the desk was the entire ministry curriculum (that PCC had purchased) for this program, as well as his church key. There was no note, no phone call, no explanation. No nothing. He was just gone. He walked away before he could be formally evaluated. I simply showed up at one of his meetings and it was too much for him. He quit.

When it came to evaluations, he was not willing to submit to the very thing the rest of us are subject to. The irony of it all? He helped write the evaluation policy himself! An even greater irony is that he is in middle management at his place of employment and is well accustomed to performance reviews.

His real problem? He expected to be exempt. He expected preferential treatment from me… from our church… and from our church’s budget. He expected us to ignore his failure. He wanted more funding - funding that could not help his program anyway - funding that could be better used elsewhere. He was hoping for an “A” grade in his evaluation, but instead was going to get something much lower. He knew it, and he ran from it. It was hard for him to accept, that, although we were friends and co-laborers in the ministry, as a pastor my oversight of the church is not for sale. He had expectations of me that I could not live up to.

I’ve told this story to say this – before you quit your church (over decisions that are sometimes made by overseers) stop long enough to consider the fact that your church leaders may actually know what is best for the church as a whole, and they make those decisions accordingly. You probably have tunnel vision and limited vision, being concerned primarily about your ministry area only and how those decisions might affect you personally. But church leaders have to look at the big picture, are privy to information that you do not possess, and must balance their decisions in light the interests of other people, and what’s best for the body as a whole. If you quit your church because of discontent, it will follow you wherever you go. No matter what church you transfer to, your internal (and unresolved) discontent will eat you alive. It is best to stay put and work your way through the tough issues.

If this man had stayed with us and submitted to godly counsel, he would still be leading that ministry here. People would be blessed, it would be very fruitful by now and he and I would still be friends. The program simply needed to be “right sized” to be effective. If he had allowed us to do that, it would be a flourishing vine by now. Pace Community Church is a fertile vineyard, currently experiencing a move of God, and if he had remained “planted” here his ministry would be very successful today.

Instead, it had to be his way or the highway. He found another church that allowed him to set up the program there and he ran it the same way he ran it here…. into the ground. The last I heard, there were two people in the group. Two people! i.e., Himself and one other! After 29 months and backing from two churches, it has withered on the vine and the fruit has fallen to the ground. None of this had to be. Maybe a hard look in the mirror is in order here.
Sometimes it best to listen to and follow the wisdom of others. Where no counsel is, the people fall: but in the multitude of counsellors there is safety (Proverbs 11:14).
Note: Next week I am beginning a series on “The Call of God” in which we will look at these topics: How to Know if You Are Called…. Evidences of a Calling… Do Pastors Need Seminary Training?... Qualifications for Pastors… etc. Today’s posting is the introduction to that series.

on May 08, 2009
Email ThisBlogThis!Share to TwitterShare to FacebookShare to Pinterest
Labels: Ten Year Hiccup